The individual creativity of an artist and the team-oriented dedication of an athlete: these are just two of the defining characteristics of Nikolay Vil in his role as Junior Sous Chef at Boulevard.

Hailing from Esil, a town in northern-central Kazakhstan on the bank of the Ishim River, Vil enrolled in Vancouver Community College International’s Culinary Arts program shortly after arriving in Canada. While studying at Western Canada’s largest culinary school, he learned skills and techniques from some of the country’s leading chefs. In 2016, Vil travelled to the IKA/Culinary Olympics in Germany with Culinary Team Canada as a kitchen helper. There, at the most demanding and diverse international culinary arts competition in the world, Vil acquired a deeper understanding of–and passion for–fine food and dining.

That same year, when it came time to select a local dining establishment for his VCC internship, one of Vil’s instructors urged him to apply at Boulevard, to pursue the coveted opportunity to learn from the very best.

At Boulevard, Vil has soared, starting as a line cook and working his way up to Chef de Partie before being promoted to Junior Sous Chef in the summer of 2022.

He brings with him a firm belief in collaborating with his fellow kitchen professionals, supporting and respecting others to maintain Boulevard’s proven commitment to excellence.

“When I was a kid, I loved to play soccer,” Vil says. “That’s what has helped me in hospitality to be a team player and to care about people I’m working with.

“My favourite thing about Boulevard,” he adds, “is that the atmosphere in this kitchen makes me feel like we are family, not just coworkers.”
Under the guidance of Chefs Alex Chen and Roger Ma, Vil is learning to “think more like a chef”.

“I want to become better as a chef, not just a cook,” Vil says. “I want to keep learning new skills and to keep growing as a chef.” 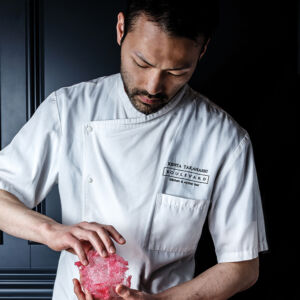 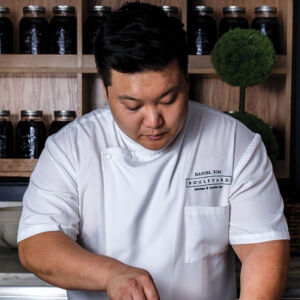