Growing up in Cloverdale, B.C., Nathan Sundeen was surrounded by the kind of farm-fresh fare that is routinely sought out by discerning chefs—such as those at Boulevard Kitchen & Oyster Bar, culinary artists with a passion for fresh, local, and seasonal ingredients.

In fact, Sundeen’s first hospitality job was at a small, full-service restaurant in the heart of Fraser Valley. There, he began to appreciate the bounty and beauty of food from nearby growers, a value that has carried over to his role as Banquet Chef at Boulevard. Having started out as a dishwasher and prep cook, Sundeen amassed a wealth of experience, his part-time job giving rise to a passion that motivated him to pursue a career in culinary arts. “It was a fantastic first job,” Sundeen says of his time at The Seasonal Experience in Langley. “I not only learned cooking skills and the value of hard work, but also got to do catering, cooking classes, pre-made meals, fine dining, lunch, brunch, butchery, charcuterie, and stock and sauce making.” From there, Sundeen went on to acquire roles at Fairmont Hotel Vancouver and Diva at the Met, among other places, before joining Boulevard Kitchen & Oyster Bar 2014. He has since worked his way up from Chef de Partie to Junior Sous Chef to his current position.

Along the way, Sundeen has had experiences that many aspiring chefs only dream of. He was a core member of Junior Culinary Team Canada, competing in the Culinary Olympics in Erfurt, Germany in 2011. In 2017, Sundeen was awarded silver medal at Canada’s 2017 Chaîne des Rôtisseurs Jeunes Chefs National culinary competition finals in Ottawa. (He worked with a “black box” of ingredients such as squid ink, guinea fowl, and chocolate to execute a three-course menu within a three-hour period.) Two years later, Sundeen earned gold in the B.C Culinary Apprentice of the Year Competition.

It was a global culinary competition a decade ago, however, that remains Sundeen’s proudest professional achievement. He was part of Chef Alex Chen’s 2013 Bocuse d’Or support team in Lyon, France. “I remember being backstage with Chef Roger Ma at the competition, seeing all of these famous chefs I grew up reading about and idolizing, and here I was in the same room with them,” Sundeen says. “It was a truly surreal experience for me.”

To this day, Sundeen is inspired by his esteemed colleagues and mentors at Boulevard. As a result, his dedication to his profession has only deepened over time. “My favourite things about working at Boulevard are the exceptional food and the amazing team I get to share the kitchen with on a daily basis,” Sundeen says. “I consider myself very lucky to work with such a knowledgeable group of people. I’m focused on developing good habits, helping others, and being in a constant state of improvement; this is what has led to the opportunities that I have been grateful to receive throughout my career.”

As an avid traveller who enjoys running and reading, Sundeen loves the fact that the hospitality industry, particularly in Vancouver, is global. At Boulevard, he has met people from all over the world, with food being a way for him to explore cultures. “At Boulevard, I’m excited about building up our new banquet department,” Sundeen says, “as well as strengthening relationships and enhancing the development of our culinary team.” 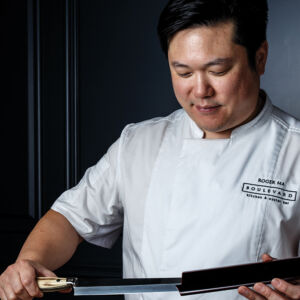