Roger Ma began his career in the industry by helping to launch Fifty Two 80 Bistro & Bar at the Four Seasons Resort Whistler in 2004. From there, Roger became an integral part of the kitchen engine that drove many restaurants in esteemed chef Daniel Boulud’s empire.

In 2006, Roger rose in the ranks at Boulud’s flagship restaurant, Daniel in New York, from chef de partie to banquet sous chef to sous chef. After six years, Roger took the role of corporate sous chef in Boulud’s Dinex Group and moved on to help open Café Boulud and dBar at the Four Seasons Toronto as well as Maison Boulud at the Ritz Carlton in Montreal. In 2014, Roger returned to his hometown of Vancouver to help open Boulevard Kitchen & Oyster Bar.

Roger is no stranger to accolades, having claimed the top prize at the 2015 Vancouver Aquarium Ocean Wise Chowder Chowdown from a field of 14 chefs. In 2016, Roger also earned a podium finish at the Bocuse d’Or national finals and won the Vancouver Curry Cup. From there, he helped lead the Boulevard back-of-house team to a gold-medal win in the Best Seafood category at the 2018 edition of the prestigious annual Vancouver Magazine Restaurant Awards. In 2019 he claimed the BC Regional Championship at the 14th Annual Gold Medal Plates BC, and most recently, in 2020 Roger was named the Georgia Straight Golden Plates Chef of the Year as well as crowned the National Champion at the Canadian Culinary Championships. 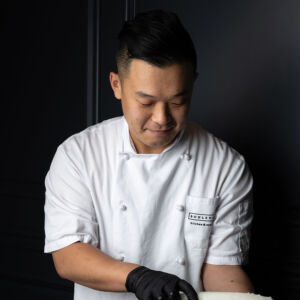